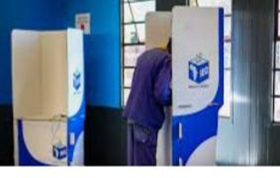 At about 11:00 on 01 November an African female aged 57 was at St Paul faith mission Church in Evaton at a voting station to vote but just after casting her vote she collapsed. The person that she was walking with tried to awoke her but unfortunately she never responded.

After some few minutes the paramedics arrived and declared her dead on the scene. The South African Police Services (SAPS) is still investigating the cause of her death as is still unclear what led to her death.