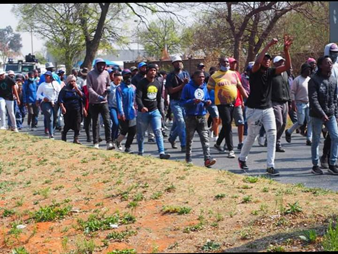 Desperate community of Bophelong took to the streets disgruntled about electricity and other issues involving the service delivery within the community.

They were desperately seeking a solution about electricity cables that are hanging above their residential homes. They claim that there is a shortage of transformers in some extensions of Bophelong in Vanderbijlpark.

Mr Simon Nkosi the community activist who is also involved in heading the youth development told the Reporter that the Municipality was running helter- skelter avoiding to give them a proper and accurate solution in resolving this issue of poor service that has been rendered to the community for quite a long period of time.

As we concluded our interview with Mr Nkosi, he mentioned that the community is not happy at all, even to date they have not received an answer in trying to resolving the whole predicament of the residents of the Bophelong .