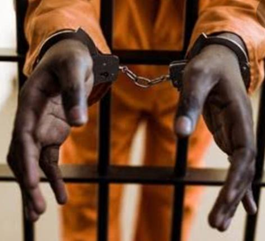 Themba Ndlovu was found guilty on various cases which is murder, robbery, attempted robbery and attempted murder that he committed on 2018/05/31.

In 2018 Themba Ndlovu committed murder, robbery, attempted robbery and attempted murder at Spar in Sebokeng zone3 thee, the accused entered the shop and pretended to be a customer, he took out the firearm and demanded money from the tills, he took boxes of cigarettes. He continued to the other tills and still took out money from the tills. He further demanded the cashier to print out airtime worth R2000.00. He also took cell phones from the cashiers.

After the accused and other suspects left the shop they met with an African male that was driving his vehicle and shot him dead. The deceased’s vehicle was hijacked.

Brigadier Sibuyi congratulated the investigating officer Sergeant Thulo from Evaton Trio team who left no stone unturned over the investigation, remained focused and collected all necessary evidence that led to the successful conviction and sentencing of the accused. He further stated that;

“The sentence today will send a strong message to other criminals who think they can murder anyone and get away with it. I encourage our members to continue to prioritise the investigation of cases against women, children and other vulnerable groups”

The reporter thanks Constable TP Msibi for compiling the information.