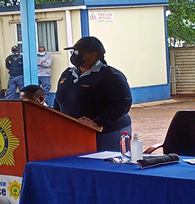 South Africa Police Services (SAPS) statistics show that alcohol is the main crime generator in terms of assault and gender- based violence which really affects the lively- hood of the communities of Vaal and also South Africa in general.

Brigadier PP Mokoena stated that alcohol is the major key in destroying the youth’s future. He mentioned that the leading areas in this regard are Orange Farm and De Deur. When it comes to excessive alcohol consumption, National liquor board as well as SAPS are working tirelessly to curtail the abuse of alcohol as it is the major source of crime.
Sedibeng District Police Major General Zodwa Molefe, stated that before leading the crew to the disposing of more than 16 000 litres of various liquor Brands at Kliprivier Police station in Meyerton on 22 October.

Operation “O Kae Molao” that consists of 14 police stations around the Sedibeng District that confiscated more than R500 000 +- alcohol from non compliant liquor outlets. As well as closing down unlicensed shebeens in Orange Farm, Boipatong, Sebokeng to mention but few.

She said the operations were intended to create awareness on liquor abuse. We have worked with several entities of law enforcement agencies: The Liquor board as well as crime prevention unit to confisticate the liquor to ensure a safe environment for all people living in the Vaal.

Mr N Sizani (UN Safety and Security Ambassador) spoke briefly at the event emphasising that so far Sedibeng District (SAPS) has improved in terms of making sure that the law is being followed concerning selling and distribution of alcohol.

Then he further stated that he was pleased to have been part of the crime prevention campaign that led to confiscation of liquor from those citizens who were non-compliant when it comes to the issue of selling liquor without proper documentation around the Sedibeng District.

District CPF chairperson Mr S Mokako thanked everyone who made it to event including all media house’s and urged the youth to stop referring abuse of alcohol to a biblical studies saying: “Jesus turned water to wine” he advised the youth that biblical verses when done in parables and that doesn’t mean they should abuse alcohol, instead they should take responsibility of their life and stop destroying their future, he furthermore said that this country depends on them (the youth).