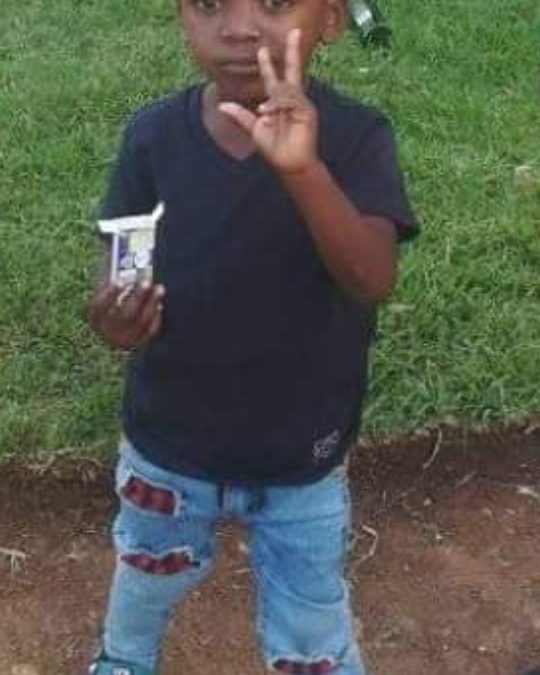 A five year old boy named Mzwandile Zithu known as Wandi from Orange farm extension 4 was found dead in a tavern two houses away from his home on the 15th of April 2020.
Wandi’s grandmother started panicking after noticing that he was nowhere to be found. Later that afternoon she reported him missing at Orange farm Police Station.

His mother on her way back from work saw a crowd  gathering at a tavern and a neighbour  informed her about the murder of her son.  The boy’s body was found standing and squeezed between a counter and the fridge in the tavern. He was naked with red wool ropes with a key tightened around his body. A brown cloth, a paper with staples on the sides, and a small bottle with muthi/medicine inside were tightened with a red rope around his feet. There was a tray with a red cross next to the body.

Apparently neighbours were concerned by the high volume of music from the tavern that day. Thembinkosi was sitting with his neighbour outside the house when his child came and said his mother was calling him, he immediately went inside and thereafter called a neighbour to come and see the boy’s dead body in the house.

The deceased boy’s family went back to Police Station to report the incident. When the police arrived with their sniffer dogs they found the blood stained clothes of the deceased inside the house. Wandi’s grandmother questioned the tavern owner why and by whom was the innocent child killed as he was found in his tavern? He responded by stating that if he could have been around this incident will not have happened. “If it’s not you then who did this, was it your wife’’? asked the grandmother. The child was found in your premises where security burglar-bars are so strong and high for anyone to go inside and there is a big viscous dog as well that even scares the police officials. The man still maintained that he knew nothing.

Both Thembinkosi and his wife were arrested and will appear in court on the 20th of April 2020.

Mec Mr Panyaza Lesufi and Mec of safety and security Mrs Faith Mazibuko visited the family and pleaded with them not to bury the child before knowing his cause of death. They will be taking Wandi’s body to forensics division for further investigations to unravel what exactly happened or how he died.

The couple have been released from police custody. Staff reporter.

“JUSTICE SERVED FOR THE DAUGHTER WHO WAS RAPED BY HER FATHER”: