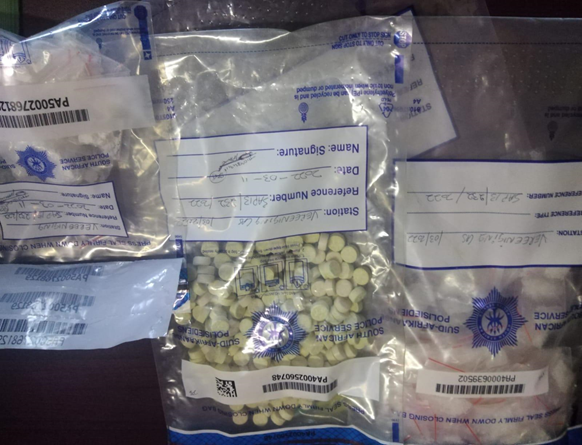 On the 11th of March suspects were apprehended by the K9 unit in Vereeniging at around 10:00 am following a long investigation regarding dealing in drugs and other illegal substance. The Nigerian national Maxwell Ikenna Igbo and Remigiud Chinedu Malo were apparently charged with contravention and dealing in drugs Act 140 of 1992.

J51 search warrant wasexecuted at no 65a Rhodes Avenue Vereeniging. One suspect was spotted at the address and he scaled the wall into house next door. He was followed and a search conducted, he was found hiding in the ceiling with another Nigerian national. Drugs were found in the ceiling and the main bedroom. Two suspects were then arrested for drug dealing. LCRC summoned photos taken. Crystalmeth Mandrax and CATS with estimated Street value R700 000. The suspects are detained as per SAP 14/91 and 92 /03/2022.

They will soon appear in Vereeniging magistrate court.