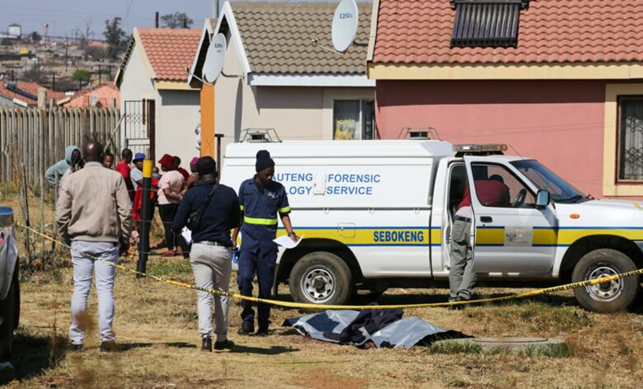 A 21-year-old Karabo Molakeng was stabbed to death by a group of men along Beverly Hills and Sonderwater streets, it is alleged that this group of men are said to be roaming the streets with guns and other dangerous weapons during the night.

The decease’d friends were also assaulted with a butt of the gun, searched and robbed.
This is after Karabo and his four friends were coming from Mkhelele, crossing Randfontein Road going to see a friend on Sunday evening on the 21st of August.

According to one of the victims who was at the scene when Karabo was killed, cops were called around 22:00 and they only removed the body on Monday morning on the 22nd of August.
The mother to the deceased Maria Molakeng, said she last saw her son around 20:00 on the last night when he left with his friends.

The deceased left with his friends claiming they were going to Extension 11 in Mkhelele. In the early hours of the morning, around past 12, I heard a knock at the door. When I opened, it was one of his friends telling me that my son was in trouble. I quickly got dressed, left with her and found my son in a pool of blood in Sonderwater street,” she said.

Dozens of residents gathered at the scene were the lifeless body of Karabo lied in a pool of blood.
SAPS arrived at the scene and eventually took the deceased body to a state mortuary.

Police spokesperson Constable Busisiwe Sango said a murder case has been opened and investigations are underway.
“No suspect has yet  been arrested however, we are investigating,” she said.