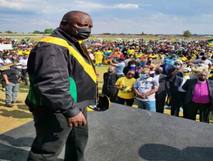 The community of Sebokeng took advantage of the day and raise some several issues which are affecting them regarding the service delivery in the Vaal. Even the religious leaders also attended the event that was held in Sol Tsotetsi sports ground in Sebokeng on 28 October.

He also mentioned to the community of Vaal that the matter of service delivery will definitely be looked into. He concluded by encouraging everyone to go out and cast their vote on the 01 November.

Orange-farm man attacked with acid over a R20 note: