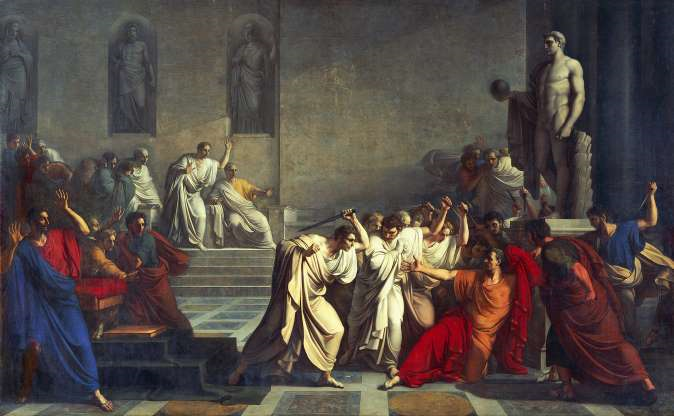 On the Ides of March (15 March; see Roman calendar) of 44 BC, Caesar was due to appear at a session of the Senate. Mark Antony, fearing the worst, went to head Caesar off. The plotters expected this, and arranged for someone to intercept him.

According to Eutropius, around sixty or more men participated in the assassination. He was stabbed 23 times. According to Suetonius, a physician later established that only one wound, the second one to his chest, had been lethal. The dictator’s last words are not known with certainty, and are a contested subject among scholars and historians alike. The version best known in the English-speaking world is the Latin phrase Et tu, Brute? (‘You too, Brutus?’). In Shakespeare’s Julius Caesar, this is the first half of the line: “Et tu, Brute? Then fall, Caesar”. According to Plutarch, after the assassination, Brutus stepped forward as if to say something to his fellow senators; they, however, fled the building. Brutus and his companions then marched to the Capitol while crying out to their beloved city: “People of Rome, we are once again free!”. They were met with silence, as the citizens of Rome had locked themselves inside their houses as soon as the rumour of what had taken place had begun to spread.