By using our website, you agree to the use of our cookies.
Got it!
Community, Human Interest, News, Opinion 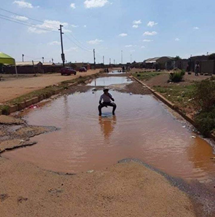 The community of the oldest township in the Vaal triangle remains disgruntled. Evaton is situated north of Sebokeng. Evaton was established in 1904.

Even today the streets of Evaton west near the Golden highway are seen full of potholes to mention but a few, when it rains the potholes are used as pools by the community children, the roads are full of water and sometimes it is scary because kids might drown or an accident might occur.

The Reporter spoke to some community members, in particular the youth. They told the reporter that many of them are unemployed and not only the streets are being neglected but even the community as well. They mentioned the lack of work opportunities is one of many reasons why so many of our fellow youth engage in drugs, alcohol and crime.

“Seeing our streets and “kasi “(township)” like this does not sit well with us, but we are hoping that the government might have something for us in terms of jobs in the near future so that we are able to give back to our community” was what most said.

As we concluded the interview they pleaded with local municipality and government to help their township situation.

A woman was found deceased outside the supermarket: