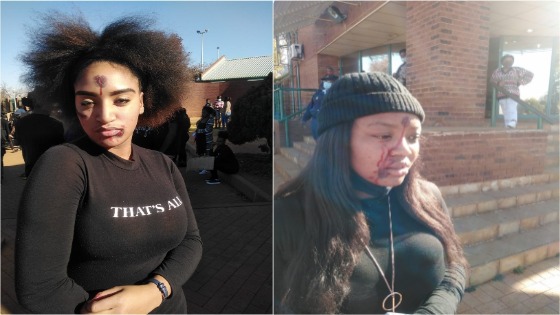 The gender based violence towards women and children has become a serious problem which the youth has decided to take a stand against, saying enough is enough. The march started at Orange farm Multipurpose centre to the police station. Their concern is that they now living in fear because they cannot trust any man around them. Young and old Women are being killed, raped and the perpetrators of these crimes are out there going freely around like hunting lions, looking for another woman to rape and kill yet police are doing nothing about it. The EFF (Economic freedom fighters) decided to support the youth in their march and making an effort that peace and security for the women out there is being served by our police officers whom the community depend on for their security.

NhlanhlaSizane (pictured above) who is Peace, safety and security ambassador at Model United Nations and also the current chairperson of the National Youth crime committee, has mentioned that police and all other relevant departments have joined hands with their organisation to fight the scourge of gender based violence.  There are measures that will be implemented to ensure that this problem comes to an end. He also said that some other criminal cases have been mishandled but all that will come to a head for safety and security of women of our country. The memorandum has been handed to the deputy station commander in the absence of the station commander. The deputy station commander could not address or say anything to the crowd because he had no authority to do so. The young youth has taken a stand and promised to come back after a week if the is no response to their concerns. Submitted by: Lefa Thatelo.

A man sentenced to two life terms in prison.